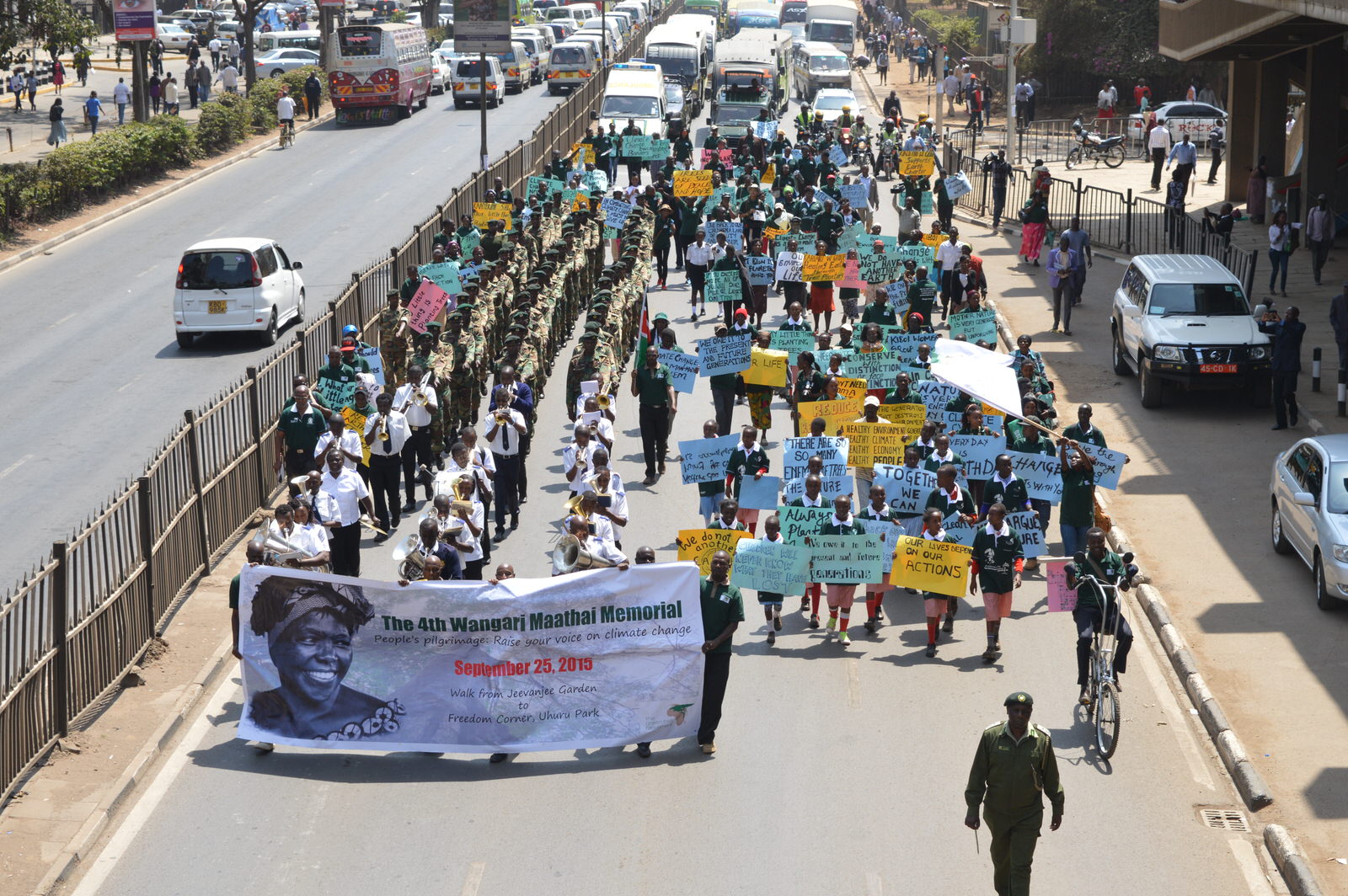 September 25, 2015 marked the fourth anniversary of the passing of the 2004 Nobel Peace Prize Laureate, Professor Wangari Maathai. A woman of many firsts, Professor Maathai was the first woman in East and Central Africa to earn a PhD and the first woman to hold a leadership position as the Chair of the Department of Veterinary Anatomy and position of Associate Professor at the University of Nairobi in 1976 and 1977 respectively.

The smiling eco warrior, as she was fondly known, was a champion of many causes. Environmental conservation aside, Wangari Maathai was also a champion of sustainable development, women’s rights, and peace – all issues which she saw as intertwined.

To mark this special day, the Green Belt Movement (GBM), which she founded in 1977, hosted a people's march to encourage communities to raise their voices on climate change and the natural environment.  The busy streets of Nairobi came to a standstill as approximately 500 community members, friends and partners of the organization walked from the Jeevanjee Gardens to Freedom corner, Uhuru Park, waving placards advocating for climate change.

Upon arrival at Freedom Corner, Aisha Karanja, the Green Belt Movement’s Executive Director, thanked all those who heeded to GBM’s call to celebrate this great legend - Wangari Maathai. In her opening remarks, Ms. Karanja spoke of Wangari Maathai’s life of commitment, courage and persistence stating that “Professor Maathai is a legend, legends don’t die.” She also highlighted the advances made by the Green Belt Movement since the departure of our Founding Chair, noting that GBM continues to plant trees, which remains the entry point to all the organization’s projects.

Speaking at the event, Professor Vertistine Mbaya, GBM Board Member, appreciated the continued support from GBM’s partners. She affirmed that the organization still carries on the ideals that Wangari Maathai stood for - better environmental management, community empowerment, and livelihood improvement. Professor Mbaya further called for new partnerships stating “even though the Green Belt Movement is working hard to meet our goals, it cannot do it without your support. Stand with us to be counted in this course against climate change”.

The keynote address by Prof. Judi Wakhungu, Cabinet Secretary (CS) Ministry of Environment and Natural Resources was delivered by Mr. Gideon Gathara, Conservation Secretary in the Ministry. In her address, the CS shone a light on the great work of conservation by the Green Belt Movement. “The Green Belt Movement is us; and we are the Green Belt Movement. Without our support, it will not thrive. It is about the work that we do for the environment. The CS stated that the fight for the environment, good governance and peace was a lifetime commitment for Professor Maathai which came at a great personal and professional cost. “Karura Forest and Uhuru Park are poignant in this context where Professor Maathai shed her blood and invoked the struggle for Kenya’s independence”.

As a way to further sensitize communities and engaging them in mitigation and adaptation to climate change, a parallel walk was held in Kitale town - with similar messages on Climate Change - in partnership with the County Government of Trans-Nzoia.