Farm to Fork: Wangari Maathai and GBM at the American Museum of Natural History 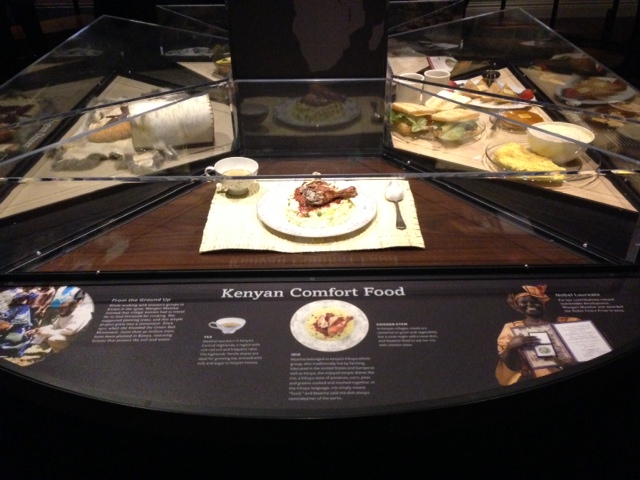 A new exhibit at the American Museum of Natural History in New York City, "Our Global Kitchen: Food, Nature, Culture", explores the complex and intricate food system.  The exhibit brings what we eat from farm to fork, and includes a sample meal inspired by Wangari Maathai, founder of the Green Belt Movement (GBM), as part of the exhibit's "Eat" section.

Professor Maathai's meal features "Kenyan Comfort Food", among other meals from around the world including appetizers from Ancient Rome, a meal for a Mongol Emperor, a dessert for Jane Austen, and a vegetarian meal for Mohandas Gandhi. Professor Maathai's meal includes iri: a Kikuyu stew of potatoes, corn, peas, and greens mashed together, topped with chicken stew and accompanied by cup of tea. Irio translates to "food" in Kikuyu. It is a simple yet nutritious meal. Professor Maathai is quoted as saying that irio always reminded her of the earth.

The first part of the exhibit, "Grow", explores the effect of industrialized farming on our environment.  It commends Kenya for its use of diversified, organic maize farming. However, the introduction of industrialized farms and agriculture in Kenya threatens the livelihoods of small local farmers who depend on the land for food production. While it may not be immediately clear, industrialized farming and monoculture directly affect deforestation in Kenya as large tracts of land are razed to make room for farms. Monoculture destroys the soil, depleting it of nutrients, making it unsuitable for harvest and creating an unsustainable food system. Fewer forests means less water in river systems, increasing the impact of droughts and the effects of climate change. As Our Global Kitchen's tagline notes, "everything we eat affects - and is affected by - the world around us."

The exhibit also discusses Professor Maathai's founding of the GBM in 1977. While working with women's groups in Kenya, Professor Maathai noticed that women had to walk long distances to retrieve firewood for cooking. Her simple, yet effective solution was to plant more trees. The home-cooked Kenyan meal featured in the exhibit also reflects GBM's work to improve environmental management, community empowerment, and livelihoods.  Promoting local food production and consumption empowers communities by increasing their self-reliance, another key objective of GBM. In addition, better environmental management translates to better food security. As the exhibit notes, the Green Belt Movement offers advice to rural Kenyans on planting kitchen gardens and growing their own nutrient-rich food.

The "Our Global Kitchen: Food, Nature, Culture" exhibit runs through August 11, 2013 at the American Museum of Natural History in New York City.