What's logging got to do with saving the climate? 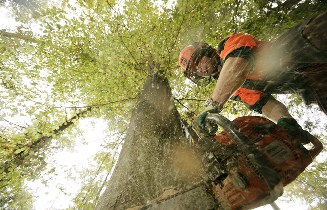 For the last two weeks the UN have again been meeting to discuss climate change at the UNFCCC in Bonn, Germany. I was there to keep up with everything that is going on and try to make sure any decisions that got made, especially with regards to forests were the kind of decisions that we here at Green Belt Movement would consider good ones.

And forests were certainly one of the top talking points at this meeting.

If you are a regular on the GBM blog you will know that we often talk about REDD+(Reducing Emissions from Deforestation and forest Degradation), this was discussed this week at the talks and things are moving forward, especially after the Oslo meeting a couple of weeks ago.

However it was not in this section of the forest negotiations that we saw problems in the last two weeks.

REDD+ deals with forests in developing countries, which is obviously why we are engaged on this issue at Green Belt Movement. But in the UNFCCC there is also a section that deals with forests in developed countries. This section comes in the part of the negotiations where they talk about developed countries emission reductions (Kyoto Protocol) and is called LULUCF, that stands for Land Use, Land Use Change and Forestry.

Over the last two weeks in Bonn they have been trying to set rules for how to count emission reductions by developed countries through these different things. However the rules as they stand have a rather large loophole in them.

A loophole by which countries could actually increase their emissions instead of reducing them. A loophole in which you could fit the emissions of Spain.

And rather importantly for us here, a loophole which could actually lead to increased logging!

Obviously working for GBM in the Europe office I don’t think this is on, and so in Bonn we worked hard to get this loophole closed. Though we didn’t manage this, we have hopefully managed to stop the rule being set in stone and so the work to close the loophole goes on.

When I sit at these negotiations and listen to the way they talk about forests though it often makes me quite angry.

Because I know it’s important that we make sure we save forests to fight climate change. But forests are so much more than carbon stocks.

They are beautiful amazing places, full of biodiversity and life.

They provide livelihoods for millions of people around the world.

They have been homes for indigenous people for thousands of years.

They are the very essence of life on our planet.

And sometimes I just wish the negotiators in the UNFCCC rooms would think about that a bit more. Then maybe they wouldn't think putting rules in place that increase logging, and in doing so increase emissions, is such a good idea.