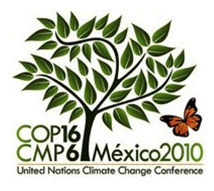 The climate change negotiations COP16 in Cancun have entered their second week with the high level segment opening this evening. Last week country negotiators put forward their positions to draft text ahead of the ministers arrival this week.

There are six bodies under the negotiations include technical issues, long term cooperative action, implementation and the Kyoto Protocol as well as the overall meeting. It is frankly very confusing and as I mentioned in my presentation at the GBM side event (more on this to come to the blog soon) a veritable forest of acronyms abound! Which makes these meetings and their decisions inaccessible to anyone who does not follow them closely or have a lot of experience in policy at the UN level. This acts to dis-locate even people attending the climate change talks from issues. Large NGOs have massive delegations numbering 10s of staff who focus on different areas and each have their own area of expertise to concentrate on.

And although you may find climate scientists here- they are not usually or necessarily the people who are negotiating for a country. So Green Belt’s delegation of four staff seems very small though we know other NGOs that send only one staff member who work themselves into the ground following the negotiations, drafting text, lobbying and speaking at side events. Attending a COP is not for the faint hearted. Even in a tropical all-inclusive paradise like Cancun.

As you know Green Belt is concerned with the impacts of climate change on the rural women and their families that we work with- they who we represent here in Cancun. Our interest at the climate change talks is not easily sliced up into each of the areas under discussion and rely on our policy wonk friends to keep us up to date on the finer details.

Furthermore we believe innovation and education are needed to help rural women deal with climate change and while both adaptation and mitigation are essential to build resilience in these communities. Reduced Emissions from Deforestation and Forest degradation (REDD+) fits under the long term cooperative action body discussions and sometimes it pops up in other texts too. I am purposely trying not to get into the jargon (as much as possible) as I want this to be as accessible as possible however there are some excellent more technical reviews of REDD+ in the climate change negotiations at FIELD.

This week is when official decision making happens and we start to see if there will indeed be any progress. Last year in Copenhagen was a disaster in this stage of the process. The climate change talks are one of the only truly representative legally binding agreements globally, each country has a seat at the decision making “table” (actually rows of tables). However in Copenhagen as it has been widely reported the negotiations and texts that countries had been working on (which takes months, years of process) were thrown out and a new simple, and non-legally binding text the Copenhagen accord was produced. The main problem with it is that countries don’t have to commit to reducing their emissions and it would not adequately address the real issue to prevent the rise of global temperatures to less than 2 degrees.

In terms of negotiations when trying to get agreement between more than one hundred country representatives sometimes the chair of the session tries to move the text forward by bringing out a new version that no one has agreed to yet. This where we find ourselves with REDD+. If you have been following the REDD+ negotiations you will know that this past year we have been hearing that REDD+ is one of the only places that we might have a real chance of agreement in Cancun. However there are some sticking points and anxiety about possible loopholes in the REDD+ text. These could mean more deforestation with a focus on profitability than delivery on the ground.

The challenge with all the climate change talks is finance- dealing with climate change is expensive, and requires financial commitment by historic polluters. Some countries like the idea of a carbon market which would generate funding to address climate change from the private sector. However we have seen in recent years how markets can be highly risky in speculative terms and cause their own devastation and markets are not designed to maximise funds to the product, in this case developing countries or their populations. Markets are essentially about generating funds and making a profit which sits uncomfortably alongside late efforts to address the impacts on lives in climate change.

Apparently there will be a new text on REDD+ tomorrow for the ministers to (hopefully) agree on. Well done if you have read this far! More reflections on how this is developing soon.