Mount Kenya 101: a rich history that you will experience with our Climb Mount Kenya Challenge! 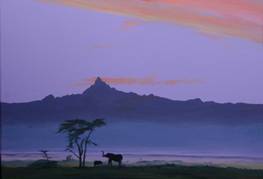 Researched and written by Samantha Wilde.

Standing just over 17,000 (5,199m) feet above sea level, Mount Kenya is the second tallest mountain in Africa after Mount Kilimanjaro. Mt Kenya is located on the equator in central Kenya and is an extinct stratovolcano that is thought to have risen over 23,000 ft (6,500m) before it erupted over 3 million years ago.

Today, Mount Kenya has been deemed a UNESCO World Heritage site for its beautiful glaciers, world class flora and fauna and breath taking views. Mount Kenya represents so much more than a beautiful National Park – It has a rich history. In Professor Maathai’s autobiography Unbowed, she describes the history of Mount Kenya from her rich cultural heritage and the changing relationship with the environment:

“For the Kikuyus, Mount Kenya, known as Kirinyaga, or “place of brightness”, and the second-highest peak in Africa, was scared place. Everything good came from it: abundant rains, rivers, streams, clean drinking water. Whether they were praying, burying their dead, or performing sacrifices, Kikuyus faced Mount Kenya, and when they built their houses, they made sure the doors looked toward it. As long as the mountain stood, people believed that God was with them and that they would want for nothing. Clouds that regularly shrouded Mount Kenya were often followed by rain. As long as the rains fell, people had more than enough food for themselves, plentiful livestock, and peace.

Sadly these beliefs and traditions have now virtually died away. They were dying even as I was born. When European missionaries came to the central highlands at the end of the nineteenth century, they taught that local people that God did not dwell on Mount Kenya, but rather in heaven, a place above the clouds. The proper place to worship him was in church on Sundays, a concept that was unknown to Kikuyus. Nevertheless, people accepted the missionaries’ worldview, and within two generations they lost respect for their own beliefs and traditions. The missionaries were followed by traders and administrators who introduced new methods of exploiting our rich natural resources: logging, clear-cutting native forests, establishing plantations of imported trees, hunting wildlife, and undertaking expansive commercial agriculture. Hallowed landscapes lost their sacredness and were exploited as the local people became insensitive to the destruction, accepting it as a sign of progress.” (Unbowed p. 5-6)

The environmental impact of changing cultural perceptions is evident in the Mount Kenya region. There is unsustainable deforestation from various illegal activities including firewood collection, charcoal burning, timber harvesting and agricultural land clearing has led to the loss of 30% of the forest cover. As a result, the Thuci and Ruguti rivers, whose catchment area lies around Mount Kenya, have significantly decreased in water volume.

As scientists have shown unsustainable industries, growing populations and increased demand for consumer goods have resulted in global climate change. As a result, mountain glaciers are shrinking at fast rates, threatening water supplies for millions of people and species. This is starkly evident on Mt Kenya where it is estimated that 92 percent of Mt. Kenya’s largest glacier, the Lewis Glacier, has disappeared over the last 100 years.

The Green Belt Movement takes part in a number of projects in the Mount Kenya region in order to curb environmental degradation and educate people on the linkages between environmental destruction and poverty. GBM communities form tree nurseries and plant seedlings on public lands, restore degraded forest areas, and private farms. Since 1977, GBM communities have planted over 40- million trees in Kenya to increase national forest cover and restore essential ecosystems. In order to increase its impact on ecosystem functioning, GBM has adopted the watershed approach, which targets vulnerable water catchment areas.

A watershed is a geographic area of land where rainfall drains to a common point on a stream, river, pond, lake or other body of water – preserving these areas is key for sustainable waterways. Furthermore by combining with GBM’s 10 step approach, GBM’s watershed approach builds a sense of community, helps reduce conflicts, increases participatory commitment and improves the likelihood of success for environmental programmes.

This year the Green Belt Movement has launched our Climb Mount Kenya challenge, giving our supporters the chance to experience the rich history of Kenya while supporting our work. The 10 day trip in October 2011 will take you to the top of Mt Kenya with experienced guides as well as on a Green Belt Safari where you’ll visit a GBM community to see our projects and the watershed approach in action. The money raised will go directly to GBM’s projects - the more money raised, the more GBM’s communities and their local environment will benefit. Check out our Trek Mount Kenya page for the complete itinerary and to sign up TODAY!