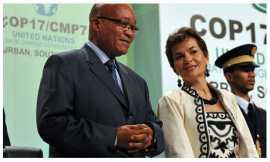 The Green Belt Movement delegation has been in Durban attending the COP 17 for the past one week. Unfortunately, there has not been much progress at the negotiation front. We have been anxiously watching as the world leaders have started to arrive – hopefully to help resolve the outstanding issues, that include the post Kyoto Protocol commitments which expires in 2012 and the Green Carbon Fund, among others such as the issues related to equity, intellectual property technology transfer (IPRs) and trade.

The Green Belt Movement experience at the grassroots level has revealed that the rural poor communities in Africa continue to be the worst hit by the severe impacts of climate change leading to loss of lives and livelihoods of people who have contributed so little to the prevailing catastrophic situation. As floods, extreme conditions of drought, water and food shortage intensify in Africa, the COP17 discussions over the past week seem to have forgotten the urgency to protect these communities from being pushed further into extreme conditions of poverty. Instead, the negotiations have been overtaken by the developed countries’ agenda to shoulder the burden of reducing global emissions onto developing countries.

As the global political leaders arrive, we hope that they will come together to agree on a favorable fate of the Kyoto Protocol – a second Kyoto Protocol commitment period that legally takes major emission reduction commitments from the developed nations.

We also hope that COP17 will start the long awaited Green Carbon Fund. Starting the fund in Durban will not be enough, though. The fund will benefit the rural communities only if sufficient money has been deposited to help them adapt and mitigate against the adverse impacts of climate change. Until then, this will remain to be an empty cooking pot!

We are calling upon our global leaders in Durban to act, act now, and act decisively towards ambitious, fair, binding commitments.