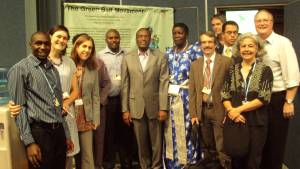 The UN climate change talks ended over a week ago in Durban. The talks over ran by 36 hours as governments struggled to find agreement. Many NGOs, including the Green Belt Movement, condemned the talks as too little too late to stop catastrophic climate change. According to science we are still on track to experience over 4 degrees increase in temperature which will be devastating for much of Africa. The deal done in Durban falls short of creating a mandate for emission cuts that is ambitious enough and also means the next commitment period will only come into force possibly in 2020. Countries including the US, Canada, China, New Zealand, Poland and India received Fossils for their poor performance in weakening the potential deal.

On the final Friday NGOs occupied the ICC where the main negotiators were meeting. NGOs protested the lack of ambition and urgency in the talks. The protests were a combination of old-style anti-apartheid activism with singing and slogans, and this year's occupy movement with a "mic check" sing and answer. From inside the talks many negotiators gave a long applause to show their support.

One of the outcomes of the talks was on Reduced Emissions from Deforestation and Forest Degradation (REDD)- progress was made on some of the technical issues relating to how to set up REDD, including reference levels and measurement of emission reductions. However weak decisions on environmental and social safeguards mean that the rights of local peoples and seeing real benefits for biodiversity are not secured in REDD. This is worrying for GBM as we presented a paper sharing our experiences delivering forest carbon reforestation afforestation projects including one pilot project under the Clean Development Mechanism (CDM) Biocarbon fund of the World Bank . GBM's CDM project is one of the very few CDM projects that is community lead with a focus on community livelihoods while restoring indigenous forests in Africa.

It is clear to GBM that as these projects currently are structured benefits to communities, biodiversity and creating climate resilience are not a given and only organisations willing to make large additional investments (sometimes making the project not cost effective) would be able to enable communities to benefit from such funding. This puts a question mark over the potential for REDD to truly deliver climate justice for those who will be most affected by climate change. A recent UN report puts women as four times more likely to lose their lives in a natural disaster. We know that the rural African women are among those who have done the least to bring about climate change and yet they will be among the first to suffer from the impact of climate change. Our work has focussed on empowering rural African women and their families for over thirty years, and after these climate change talks, the importance of hearing their voices and experiences at the decision making table is as great now as ever before.

These talks were also marked by a number of special memorials held for Wangari Maathai including at Forest day 5 and at the civil society venue. In memory of Wangari, Barack Obama made his only direct contribution to the talks paying tribute to her and her steadfast commitment. From one former community activist now President of the USA to another activist who fought all her life for justice, who shared Kenya as a part of their heritage, action continues to speak louder than words.