Unveiling of the Late Professor Wangari Maathai Statue in the US 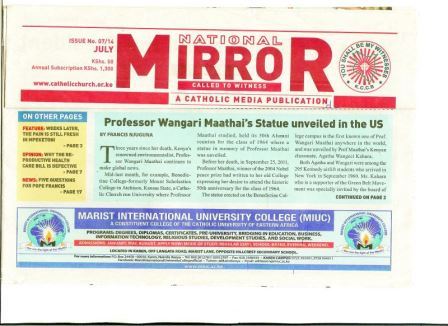 A Catholic Church-run College (University) in the US has honoured Prof Wangari Maathai posthumously. The Benedictine College, formerly Mount Scholastica College, unveiled a statue of the late Prof Maathai, which formed part of the weeklong activities marking the 50th anniversary of the college’s 1964 graduates last month.

“To have a statue of Wangari Maathai on our campus has been a dream for a while, and it is appropriate that it is here in St. Scholastica Plaza, where our students will see it and aspire to be like her,” said Benedictine College President Stephen D. Minnis.

The sculptor was Bill Hopen, who had previously done the statues of two students and a Benedictine Sister, along with a bas relief, that grace St. Scholastica Plaza outside of Elizabeth Hall.

“It was such an honor to be selected to do this portrait,” said Hopen.  “I’ve done many portraits of famous people; astronauts, senators, millionaires. I have to tell you, this is the most favorite subject I’ve ever had. But it was a challenge in many ways.  For instance, there was the smile. It is never done in bronze but it had to be in Wangari’s case because there are no pictures of her that exist without this optimistic, positive, charismatic smile.  It had to be expressed.”

The event included a poem written by Sister Thomasita Homan, OSB, a Benedictine Sister from the Mount, former professor at Benedictine College, and a close personal friend of Maathai

Prof Maathai and her colleague, Agatha Wangari Kahara formed the 1964 class and were among the 295 Kennedy airlift students who arrived in New York in September, 1960. About 70 classmates of the College’s 1964 graduates drawn from Africa, America and Japan attended the June 14 grand fete. The Benedictine Campus is situated at Achitson, Kansas State, US.

Kahara, the first Woman Information Officer in the then Information and Broadcasting ministry was invited to represent Prof Maathai at the grand fete. “I had the honour of unveiling the erected statue of the late Maathai as well as addressing the congregation of the day,” Kahara said in an interview. _by a report Francis Njuguna

Salisbury, a dear friend of Wangari’s who used to take her home over the summers, spoke at the dedication and noted that Kenya was a new country at the time, just emerging from colonial rule in 1963.

During the ceremony, Salisbury recalled Wangari’s famous hummingbird story about taking action.  In the story, a hummingbird carrying small droplets of water in an attempt to put out a forest fire is stopped by other animals who say she isn’t making any difference.  The hummingbird acknowledges that she is small, but she is doing all she can.