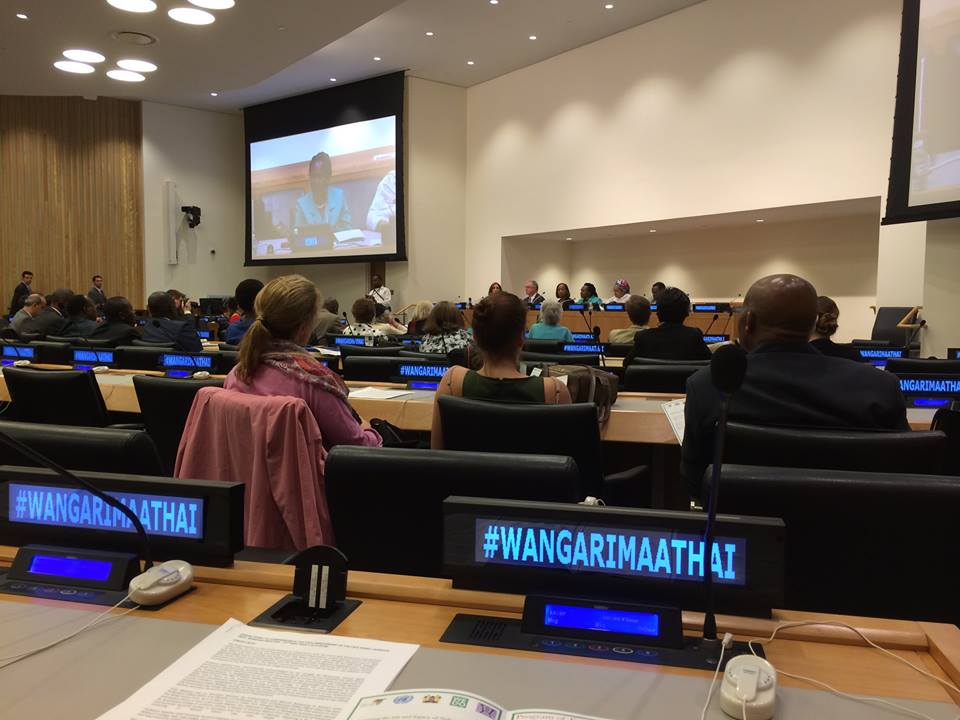 Monday, 19/5, a special event in celebrating the legacy of Nobel Laureate Prof. Wangari Maathai and to commemorate the 10th anniversary of her Nobel Peace Prize was organized by the Kenyan Mission, in collaboration with the Green Belt Movement International (GBMI), the UN Forum on Forests, the Women’s Environment & Development Organization (WEDO) and the International Council of Women (ICW).

The celebration opened with remarks by Kenya’s DPR, who provided an introduction to the works of Prof. Maathai and spoke of her tireless efforts, countless achievements and over numerous awards. A brief of The Taking Film was shown documenting the beginnings and success of the Tree Planting for Watersheds campaign started by Prof. Maathai in her efforts to bring better health, food and water security, employment, stability and peace to Kenyans. In a statement on behalf of the PGA, his Chef de Cabinet said she regarded Prof. Maathai as a pioneer of sustainable development and spoke of her keen awareness for the integral role women played in sustainable development. ASG Mohammd, for the SG, said Wangari Maathai lived — and risked — her life defending the environment and fighting for women’s empowerment.  She was threatened and imprisoned, but never intimidated.  Along the way, she became a pioneer in promoting sustainable development and articulating the links between human rights, poverty, environmental protection, peace and security. The First Deputy Commissioner of NYC Parks spoke of the role Prof. Maathai played in advising the City of New York on how to realize their “One Million Trees” campaign. That campaign inspired the work of Prof. Maathai with UNEP in launching the “One Billion Trees” campaign, as remarked by the Chair of Greenbelt Movement International. Finally, comments were offered by Prof. Maathai’s son and daughter who thanked the supporters of their mother. The celebration concluded with the planting of a dogwood tree donated by NYC and the installment of two commemorative plaques in the North lawn Gardens.