The Ecology of Public Space: from Uhuru to Taksim 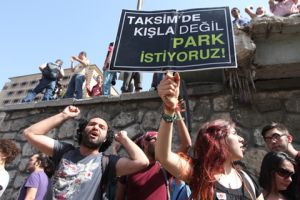 by Mia MacDonald and Wanjira Mathai

Almost a quarter century ago, Wangari Maathai, the Kenyan environmentalist, Nobel Peace Laureate, and founder of the Green Belt Movement, campaigned to save a similar public park in the city of Nairobi. Like the current struggle in Istanbul, Turkey, Maathai's efforts morphed from an effort to preserve an urban green space to a citizen-led demand for transparency and accountability from those who, in the name of the people, held the wealth of the commons in trust.

Of course, there are important differences between Turkey now and Kenya then. Turkey is a democracy and the world's media-perhaps with their awareness raised following the global "Occupy" movement-are paying attention in a way that wasn't the case in Kenya, which 25 years ago was a one-party state. Online social networks also now enable protestors like those in Taksim Square to organize and broadcast their demands to the world.

In 1989, Maathai learned that the government, under the autocratic leadership of president Daniel arap Moi, intended to excise a portion of Uhuru ("Freedom") Park in downtown Nairobi to build a 62-story skyscraper complex to house the headquarters for KANU, his ruling political party, along with offices, a shopping mall, parking for 2,000 vehicles, and a large statue of Moi himself. The original size of the park had already been reduced by development: a hotel, a road, a members-only golf course, and a football stadium had all been built on parkland during previous years.

Maathai recognized-as the Taksim Square protestors proclaim today-that the park's importance to Nairobi was akin to that of Hyde Park to London or Central Park to New York City and she resolved to try to stop the project.

Unlike in Turkey today, dissent wasn't tolerated; she risked imprisonment and worse if she called people out to protest. So Maathai fought through letters-to government officials, those backing the development (among them the late British tycoon Robert Maxwell), and international agencies and consulates. She also shared these with the media.

Although largely under the thumb of the regime, a handful of editors were seeking greater press freedom, and covered the story. They also printed numerous letters from Kenyans who supported Maathai's campaign. "A green belt in the city creates a meaningful contrast to the concrete jungle," one wrote; another, a child, wrote: "Uhuru Park is where my parents take me over the weekend."

For her efforts, Maathai was publicly denounced by the president, who called her a "wayward woman" and accused the complex's opponents of having "insects in their heads." Parliament interrupted its proceedings to pillory her, and the Green Belt Movement was summarily evicted from its offices in a government-owned building (Maathai's staff of 80 had to move to her modest home).

Emboldened by Maathai's stand, however, opposition continued to grow until in early 1992, under the cover of darkness, the fence in Uhuru Park that demarcated the construction site was quietly removed, and the project abandoned. At a meeting the next morning of women leaders, Maathai declared victory, announcing the complex to be dead: "as dead as a dodo". The slaying of the "park monster" is acknowledged as a milestone in Kenya's journey toward multi-party democracy.

Maathai understood that for young and old, rich and poor, Uhuru Park offered a respite from the sprawling housing estates and commercial buildings that had chewed up former grassland and forest. It continues to be an invaluable haven in the heart of downtown Nairobi.

Maathai also recognized that green space reduces ambient heat in cities, mitigates the effects of pollution and absorbs greenhouse gases. Urban parks act as simple but socially vital safety valves for ordinary men and women to release some of the pressures of daily life in the city-especially for those who've left rural areas for the promise of more and better paid work in the city and find themselves living in treeless informal settlements or featureless tower blocks.

This is why in the late 1990s, Maathai and the Green Belt Movement rallied to prevent the government from selling off parts of Karura Forest in northern Nairobi to political cronies to build luxury housing. The threat wasn't only to the Karura ecosystem, known as Nairobi's lungs, but to the curtailing of Kenyans' liberties. Although this fight was a bloody one, with violent attacks by security forces, Karura Forest is now protected and has become a popular recreation spot.

As public space has become increasingly privatized and commercialized, such green space reminds people that they're citizens and rights-bearers, and not merely consumers and logo-wearers. This truth is also not lost on governments or corporations. They understand that where people are free to gather, soon enough they will gather to be free. They will gather to express their need for what Maathai called "democratic space."

This is why Maathai's vision of the ecology of public space-that green space is democratic space-has never been more necessary. In Taksim Square or anywhere people are attempting to create healthier neighborhoods, or seeking as a planetary community to foster sustainable societies, and to engage the support of their fellow citizens to do so.

Mia MacDonald is the executive director of Brighter Green, a public policy action tank in New York, and the chair of the board, Green Belt Movement International-U.S.

Wanjira Mathai, the daughter of Wangari Maathai, is Vice-Chair of the Green Belt Movement and Project Leader of the Wangari Maathai Institute for Peace & Environmental Studies at the University of Nairobi.