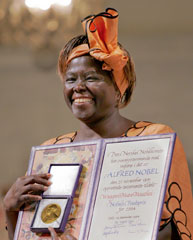 Wangari Maathai was awarded the Nobel Peace Prize in 2004. In its citation, the Norwegian Nobel Committee noted Professor Maathai’s contribution to “sustainable development, democracy and peace.” The Committee further stated that Professor Maathai “stands at the front of the fight to promote ecologically viable social, economic and cultural development in Kenya and in Africa. She has taken a holistic approach to sustainable development that embraces democracy, human rights and women’s rights in particular. She thinks globally and acts locally.” In accepting the award, Professor Maathai said: “I believe the Nobel committee was sending a message that protecting and restoring the environment contributes to peace; it is peace work. . .  . I always felt that our work was not simply about planting trees. It was about inspiring people to take charge of their environment, the system that governed them, their lives, and their future.”