Samburu communities rely on the Kirisia watersheds to provide life-giving resources. Women and children search for water and firewood for domestic use, and the men and the young men (known as ‘Morani’) search for water and grazing pastures for their livestock. To substantiate the family income, both men and women participate in charcoal burning around the Samburu District. However, the overdependence on forest resources in the Kirisia watersheds has pushed these dryland forests to their limits. 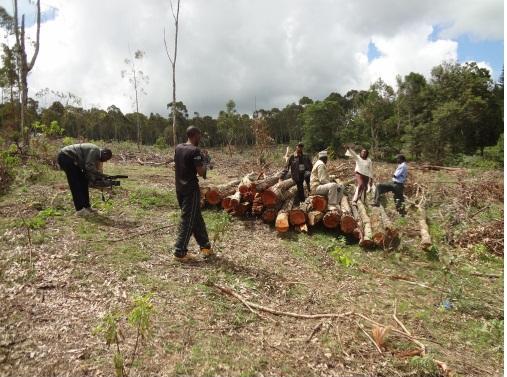 The forest degradation has resulted in dry river beds, extensive soil erosion and siltation, and the conversion of forest land into grasslands. The rates of charcoal burning have also increased and sand harvesting cases have been rising as the deposited sand in dry river beds has become exposed.

When interviewed about the forest degradation, a Samburu woman explained:

“The search for food is the reason I cut down trees. The trees belong to God and taking them is better than stealing from my neighbours. Since the destruction [of the forests] the elephants are gone’”.

The reduced elephant population in the area is a direct result of the deforestation as they have to move to find new habitats. Members of the Samburu community do not cut down trees because they want to, but they cut down trees in order to put food on the table. If sustainable alternatives were available or they had greater capacity to generate extra income they would not destroy the very forest which has supported their community for decades.

The Samburu community has co-existed with the environment and wildlife for a long time. However, with the current levels of forest degradation and the ever increasing impacts of climate change, conflicts over resources are becoming commonplace. Local rehabilitation projects in partnership with the international community are therefore crucial for both the survival of the forests and for peace.

The Green Belt Movement supported by the Prince of Albert II of Monaco foundation, Yves Rocher foundation and The Schooner Foundation is currently running one such rehabilitation project. Working within existing community structures and cultures which strongly support conservation work, GBM’s project aims to rehabilitate the Kirisia forest, achieve community empowerment and improve livelihoods for the Samburu people.

The target is to plant 250,000 trees across farm and forest land in four central tree nurseries, the first of which has already been established. The project will run for three years and so far has recruited 22 community groups, which include men, women and youths. Forest volunteers will help to protect the newly planted trees. You can hear weekly updates on the project, and learn about GBM’s 'Community Empowerment and Education', and get advice and support through the radio station, Serian FM (88.9FM).

By involving local communities in the protection and rehabilitation of the Kirisia watershed the project’s benefits will be long-lasting; not only through livelihood and environmental regeneration, but by inspiring other communities and future generations to undertake further rehabilitation projects.