My GBM Experience: a Lesson on Activism in Kenya

Tuesday 3rd July was my first day as a communications intern at the Green Belt Movement (GBM). On this day GBM was holding a peaceful protest in an attempt to stop the illegal land grabbing of a playground at Uhuru Estate Phase IV, a suburb of the greater Nairobi area. By 9:30 am, all the GBM staff and community members who were taking part in the peaceful protest had arrived at the designated meeting point, near Bahati Shopping Centre. The staff had brought banners, whistles and a Kenyan flag, and everyone seemed ready to go.

Popular reggae music from the GBM van filled the air as we marched down towards the playground. Residents came out of their houses eager to see what was happening and our banners told it all. “Enough is Enough. Stop Grabbing Public Land,” read the banners we carried. The plan was to have speeches and plant some trees at the site of the illegal development. Unfortunately, it did not work out as planned.

As we approached the playground, we could see a group of rowdy youths blocking the entrance. The GBM procession stopped right in the middle of the road trying to decide what to do next. However, before any decisions could be made, a number of the youths came running toward the GBM staff and community members and wrestled the banners away from them.

The young men were out for a fight as they carried crude weapons including metal bars, stones and huge sticks. They pursued and threatened anyone who was wearing a GBM t-shirt or cap. Although I wasn’t wearing any of these items, I was carrying a whistle that made it easy for them to identify me as one of the peaceful protestors. At one point, I ran for my life as I was being chased by some of these young people. If I didn’t know what exactly it means to be an activist in Kenya, I do now. Advocacy and activism in Kenya is by no means easy but it is certainly doable. GBM staff are lucky to have learnt from the very best: Professor Wangari Maathai. In the words of Professor Mathaai, “We cannot tire or give up. We owe it to the present and future generations of all species to rise up and walk!”

After about an hour of separation between GBM’s ‘Enough is Enough’ peaceful protestors and the youth, tensions decreased. We were all able to gather at the site of contention and start a conversation about the issues at hand. The area’s Councilor, Robert Mbatia, and the District Commissioner, George Natembeya, soon arrived to facilitate discussions but it quickly became apparent that these government officials were not interested in hearing our side. They adamantly defended the disputed project. In his speech, Councilor Mbatia said that the residents of Uhuru Phase IV had agreed to have the social hall built on the playground’s site – a fact that many local residents dispute. 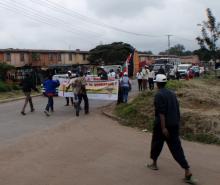 Some local residents who witnessed the ordeal said that they did not know who the youths blocking our protest were. They claimed that they had been brought from other parts of the city and paid to disrupt GBM’s peaceful demonstration.

Going forward, GBM will be advocating this case in the courts and bringing it to the attention of high-level government officials to ensure that the illegal land grabbing of this playground is brought to an end. We are also working with the local authorities to see that these perpetrators of violence are brought to justice. Join us in saying ‘Enough is Enough’!