Moving on from Copenhagen 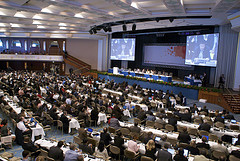 In December in Copenhagen world leaders were supposed to reach a global deal on climate change at the United Nations climate talks. Needless to say, they did not!

But here at Green Belt Movement we know that the fight to tackle climate change cannot be put on the back burner. In Kenya the effects of climate change are already being felt, the shrinking glaciers on Mount Kenya pay testament to this.

Last weekend in Bonn, Germany the UN body responsible for the climate change talks, the UN Framework Convention on Climate Change or UNFCCC met for the first time since Copenhagen to work out how they can get back on track and work in 2010. I was there to see where we would be going over the next year leading up to Cancun for the 16th Climate change meeting or COP16

Copenhagen finished with an ‘accord’ that was not formally adopted by the UNFCCC-- this means there are no real commitments to either emissions reductions or finance for adaptation and also no deal on forests. So in 2010 there is still lots to do. At the UN all countries must agree on decisions, so it takes time and we are definitely not there yet!

In Bonn they did manage to agree how they would work together over the next year, however there was also lots of picking up the pieces from the backlash over what happened at the end of Copenhagen. Many countries felt left out of the process by which the accord was developed and they definitely aired their feelings. But at the end of the weekend they did reach agreement and they now know how they will move forward.

In 2010 expectations are not high of achieving a global deal on climate change, but expectations are high that many of the pieces of the jigsaw will begin to come together, with one of them being REDD

REDD and the role forests will play in fighting climate change is why it’s so important for GBM that the UNFCCC process allows everyone to have a say. Forests are a hugely important piece of the climate jigsaw and they are overwhelmingly in developing countries. We must ensure that deals done on forests have the forests and the people who live there at their heart. We must make sure deals done to fight climate change have justice at the heart of them.

In Kenya we are already working on REDD with the government and other institutions, to ensure systems are in place so that funds will flow to protect forests effectively. We need to make sure these experiences and the lessons learnt are also heard at the UNFCCC.