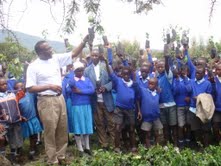 Creating a world where we plant as many trees as have been cut down might be a fairy tale that you could tell an environmental enthusiast! However we came one step closer to making this a reality on 10 October, when the local administration and community members from the Rift Valley area in Kenya were led by Green Belt Movement workers in the planting thousands of seedlings to mark the 10:10:10 Billion Tree campaign.

The precise location was Eburru Forest, part of one of the five major water catchment areas of Kenya, the Mau Forest. This area is being deforested at an exceptionally fast rate due to logging and charcoal burning.

The tree planting at the site was a rallying call from those present for Eburru to regain its glory. Among those that joined the chief and other leaders of the community at this day-long event was a huge turnout of school children, who themselves planted more than five thousand trees.

Professor Karanja, the Executive Director of GBM, thanked the community for their effort and emphasized the need for sustained planting of trees that would help ensure that rain patterns are not interrupted and improve water availability in catchment areas.

The local chief voiced the need for illegal logging and the burning of charcoal to stop. He hearkened back to the land he had experienced as a young child, saying how the spot where we stand today would hardly be accessible as the forest cover was thick.

He repeated the importance that forests play in enabling rain pattern predictability expressed by Professor Karanja, and how this helps put food on our tables. Praising the community for turning out in such large numbers, the chief said that their effort was going to go a long way in regaining a green and food secure Kenya.

Local residents were urged to continue to plant and nurture seedlings for the future, as this would not only lead to a stronger, more plentiful environment for them to live in, but contribute to the fight against climate change.