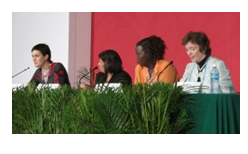 In the recently convened COP 16 in Cancun, the challenges women face, given they are on the front-lines of the climate crisis, was a major highlight as well as how gender factors in handling the challenges brought about by climate change. When natural disasters strike, they hit poor communities first and worst. Since women make up an estimated 70% of those living below the poverty line, they are most likely to bear the heaviest burdens. They, who regularly do the household work, cultivate the crops, collect the water and gather the fuel, are the most affected by climate change. But it should also be understood that women are vital to building resilience in poor communities.

It is against this backdrop that the role of women in climate change was further emphasised through a number of gender related side events at COP 16 in Cancun such as the "Women's Leadership on Climate Change Justice and the Grassroots Perspective". This side event took place on Saturday 4th December, 2010 and was jointly organised by Realizing Rights, the Mary Robinson Foundation on Climate Justice, the Green Belt Movement, Nobel Women's Initiative and Climate Wise Women. Strategies on how women can participate in decision making processes related to climate change was the highlight of this side event that had participants drawn from different organisations and countries attending the COP 16.

"We know that women in the global South make up the majority of the world's poorest people, and are also among those worst affected by the current and imminent impacts of climate change. We also know that men and women contribute to and are affected by climate change in different ways, as the demands made on them by family and community vary. Given existing gender inequalities and development gaps, climate change ultimately places a greater burden on women.

While the dust settles after COP 16 at Cancun and the debate continues regarding the effectiveness of decisions some feel are effective and others feel highly compromised, for certain the first steps are being made towards a longer term commitment for climate action at an international scale and more so the responsiveness to the needs of women. The issue of gender and women no longer remain invisible and unspoken when it comes to combating the effects of climate change.