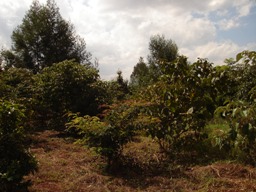 It is no exaggeration to say that Karura Forest is one of the most beautiful places in Kenya.

At 1,063 ha it is Nairobi’s largest suburban forest and home to Sykes monkeys, bushbucks, dik dik, duiker, bush pig, genet and civet. This forest also has attractions such as a river, a waterfall, a bamboo forest and caves once used by the Mau Mau as hideouts from the colonial powers. All within a few minutes of the city center!

Many of my GBM colleagues and I attended the official opening of Karura Forest over a week ago and it was an emotional ride – emotional because it was in this forest that many GBM staff and supporters, including our own Nobel Peace Laureate, Wangari Maathai, almost lost their lives trying to secure it. It was this forest that for years represented the underbelly of our government and the dysfunction therein. It was this forest that reminded us that the environment is political. And quite frankly the thought that my daughter can now go there and enjoy a picnic, a walk and some splashing in the river is amazing!

And so it was with absolute delight that Karura Forest officially opened to the public with a line up of weekend activities that would have rivaled any city fair – a teddy bear picnic for kids, a bird watching tour, a family scavenger hunt, a bike challenge, picnics and a historical tour. It was a fun filled weekend that we are thrilled will be repeated many times.

We want all of you to walk through Karura (there are 5km and 10km walking trails). At GBM we have made it a tradition to take anyone who comes to visit us for a walk in the forest. We want as many of our friends and supporters to experience this magical place. It speaks for itself really.. more than words can say.

As I watched GBM staff at the opening ceremonies, I could not help but read through their smiles. “We saved this forest” one of them told me “Now I know why we do advocacy. It’s all worth it!”