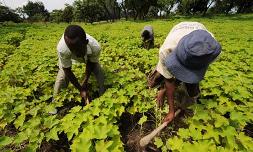 This blog was written by guest blogger and intern in GBMI's Europe Office, Sofia Olsson.

Last week I made my way to the UK houses of Parliament, and not just to look at its grand exterior but to expand my knowledge of biofuels. Yes, biofuels. As somewhat of a newcomer to the subject, my previous knowledge was limited to the fact that biofuel is made out of plants, and sometimes out of recycled cooking oil. I also knew that GBM was not in favour of it but not the reasons why. I was interested to learn more about the topic from the panel discussion which Friends of the Earth, RSPB, and Action Aid had arranged. They had invited a range of different academics and expert speakers to discuss the impacts of biofuels on the environment and people around the world. In particular the discussion was focused on the EU’s new target, the so-called Renewable Energy Directive (RED- another RED different from the REDD GBM often reports on), which states that 10% of all land transport fuels should come from a renewable source. I was eager to find out, have we finally made one massive step into a more sustainable future?

After skimming through the introductory pack of leaflets and information booklets, I quickly changed my mind. Apparently, there are several major problems with the rise of biofuels use in the UK and Europe. It is affecting the developing world’s biodiversity and food security, as well as the whole world’s climate. So, what is it about biofuels that makes it so environmentally unfriendly when on the surface it seems like a good idea

The speakers attending the discussion ranged from MPs to Southern NGO representatives and they all gave interesting insights to the problems with biofuels. There are a few speakers experiences which I would like to share with you.

Firstly, David Baldock, the CEO of the Institute for European Environmental Policy (IEEP), gave an account of his organisations research into biofuels. The most important point, I thought, was when he highlighted the fact that even though the EU is looking into having ethical restrictions on its imported biofuels, there is still a limited amount of land in the world where it can be grown. If biofuels production starts taking over arable land in the developing world, the demand for food and animal feed will still be the same, and people could then move into other land areas, such as natural habitats, forest land, or grassland. This development could therefore lead to further releases of green house gases that have been “locked up in soils and biomass”. Baldock, consequently, highlighted that if countries follow their ambitious biofuel targets for 2020, there would be a net increase in greenhouse gas emissions in the world.

Another speaker, which I thought was hugely inspirational and interesting, was Fatou Mbaye, from ActionAid Senegal. She gave an example of when biofuels production results in the loss of food security in a country. The expansion of the production of biofuels has made it harder and harder for farmers to attain land in Senegal. The government has expanded its production of the infamous plant Jatropha, used in biofuels production, which is taking over important land that was previously used for food production. Mbaye highlights an account of a Senegalese woman who states that “our cereal banks are empty because many farmers, mainly women, gave away their land and expected to increase their cash income by working on the Jatropha plantations”. However, the work on the plantations would not be for the full year and these women would then have lost their land without increasing their cash income.

Serah Munguti, who works for Nature Kenya, was another very interesting speaker. She highlighted two particular areas in Kenya which are both threatened by biofuels production, the Dakatcha Woodland and the Tana River Delta. Both these areas are important for birds and other endangered species. The Dakatcha Woodland would be threatened if the proposed plan of clearing the area and convert it into land for biofuels production would go through. Furthermore, the Tana River Delta has, along with endangered bird species, 80000 pastorals living in the area. They would all be threatened if a proposed plan of biofuels production will go ahead.

After hearing these accounts from around the world, it is much clearer to me why GBM’s founder Wangari Maathai signed the “The Forest Now Declaration”, which highlights that deforestation and forest degradation is, among other things, driven by the external demands for biofuels.

When we look at these examples it seems as if the assessment of the social, cultural and environmental impacts of the EU targets has not been very thorough. As Baldock stated “we need to shift the focus away from easy options and actually look into sustainable alternatives”. As I was leaving the beautiful interior of Parliament, I was feeling satisfied at having gained further understanding of an issue threatening the environment and people’s livelihood in the developing world, but I was also feeling frustrated that another attempt at trying to stop climate change has backfired. What actions can we take to make way for a greener and more environmentally sustainable future?