Green Belt Movement International- Europe is pleased to announce the Third Annual Wangari Maathai Memorial Lecture on Tuesday, June 16th to be held at St James Piccadilly Church. We are delighted to announce that this year’s keynote speaker will be the Executive Director of Greenpeace International and activist Kumi Naidoo, speaking on sustainability as a fundamental human right.  The talk will be followed by a panel discussion of prominent conservationists and academics on how sustainability as a fundamental human right can be translated into meaningful work in the field. 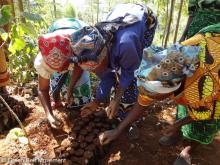 The event starts at 19:00 beginning with Mr Naidoo’s keynote speech followed by panel discussion and Q&A. We invite you to stay for drinks and canapés following the reception. GBM Trustees and staff from both Kenya and the UK will be attending as well as prominent conservationists, human rights activists and campaigners.

Proceeds go to the continuation of the work of the organisation.

The Green Belt Movement (GBM) was founded by Professor Wangari Maathai in 1977. GBM is an environmental organization that empowers communities, particularly women in those communities, to conserve the environment and improve livelihoods. GBM uses a watershed-based approach in its conservation and forest restoration activities that is underpinned by Community Empowerment and Education (CEE) programmes.  Our goal is to ensure that communities understand the linkages between environmental degradation and their livelihoods, and that they can take action to protect their natural environment.  To date, GBM has empowered women and communities to plant over 51 million trees in Kenya and has been a model for similar environmental efforts in countries around the world.

Originally from South Africa, Kumi Naidoo has been Greenpeace’s International Executive Director since November 2009. He is an ardent human rights activist and environmentalist, having campaigned for the anti-apartheid movement in South Africa in the 1970s and 80s through the Helping Hands Youth Organisation.

He is a Rhodes Scholar and earned a doctorate in political sociology at Magdalen College Oxford. He has served as Secretary General and Chief Executive Officer of CIVICUS: World Alliance for Citizen Participation for 10 years and has also sat on the board of Greenpeace Africa.

Recently, Mr Naidoo has led the Global Call for Climate Action (Tcktcktck.org), which brings together environmental, religious and human rights groups, labour unions, scientists and others to campaign around climate negotiations.

Kumi is dedicated to engagement, dialogue and peaceful campaigning around environmental issues and emphasises the interplay between human rights, women’s rights, and broader issues of sustainable development. He is passionate about lobbying for green business practice and transformational change within the energy sector.

Professor Wangari Maathai (1940–2011) founded the Green Belt Movement in Kenya in 1977 as a response to growing environmental degredation in the region and its impact on local livelihoods. Recognising the importance of women’s empowerment and access to sustainable natural resources, Maathai worked with local collectives to grow seedlings and plant trees to bind the soil, store rainwater, provide food and firewood, and receive a small monetary token for their work.

Maathai was the first woman to gain a Ph.D in East and Central Africa; and the first female chair of a department at the University of Nairobi/

Honoured throughout the world for her work for the environment, democracy, and peace, Professor Maathai was the author of four books including her autobiography: “Unbowed” and the subject of a documentary film, “Taking Root”.

In recognition of her work and activism Professor Maathai was awarded the Nobel Peace Prize in 2004 and as well as receiving broad international recognition for her struggle for peace, democracy, and sustainable development.