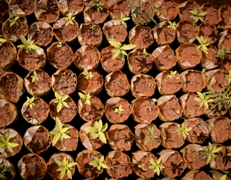 This blog was written by guest blogger and intern in GBMI's Europe Office, Tim Webster.

It may surprise some of our supporters that Kenyan armed forces have been working with the Green Belt Movement (GBM) since 2006 to fight environmental degradation, which is happening on a staggering scale. Many people associate the army with military action however the Kenya army has been planting trees with GBM since 2006.This innovative collaboration has now been formally congratulated with the presentation of the ‘Wangari Maathai Environmental Award’.

GBM worked with General Jeremiah Kianga, Chief of the Defence Forces, to develop and establish the Environmental Soldier Programme in order to protect Kenya from its internal enemy –each soldier is given the task of planting 200 trees in a year. Since planting began in 2006, 1.4million trees have been planted within military barracks across Kenya, with 992,379 trees surviving.

As you know, GBM has been passionately planting and nurturing trees for over three decades, working with rural communities in Kenya to provide sustainable livelihoods and to encourage a new respect and understanding of the environment. Karura Forest in Nairobi has been a key site of intense struggle for environmental justice in the past: including GBM protests overland grabbing and highly controversial housing developments.

Kenya army soldiers are working with GBM and the community to plant 3 million trees across Kenya. The process is truly collaborative - soldiers dig holes whilst women bring the seedlings from nurseries and plant them in their new homes. Through their actions and ongoing support the soldiers have become signifiers of peace for the communities. Once opponents of the work of GBM, the military is now working with the organisation and the Kenyan people, marking an important shift in environmental consciousness.

As a result of the military’s outstanding commitment to peace and prosperity for the people of Kenya, and in tackling environmental degradation, GBM have awarded individuals and bases involved in the Environmental Soldier Programme, including General Jeremiah Kianga, and Lt General Julius Karangi, Assistant Chief of Defence Forces. Other military personnel were also given the Wangari Maathai Environmental Award for their outstanding achievements through the programme included Rtd. Col. Bernard Kimani, Pte. Samuel A. Murungi and Col. Philip Wang'ombe. The Kenya Navy, Mtongwe and Moi Air Base, Eastleigh, were also recognized for their exceptional results in and commitment to the programme.